Compound Interest is the real deal breaker for Investment!

Can we invest once in a quarter? Can we expect the investment to double in 6 months? Is this going to be the safest mode of investment? And the questions keep springing up in our mind until we get the answers in a form of guarantee, isn’t it?

Let’s have a reality check!

Have you ever seen a seed growing into a tree until it is not planted and watered regularly?

Have you ever seen an athlete claiming that he/she began to run at a certain speed all of a sudden in one night?

“Power of compounding is the eighth wonder of the world,” said Albert Einstein.

All you have to do to achieve this eighth wonder is to understand two basic principles, first make sure to invest as early as possible and give time to your investment and secondly remain invested and let it grow. Do not retreat your money in between. These two principles make money making simple as a piggy bank to your kid.

If we can construe the easiest way to break the meaning of Compound Interest, it means nothing but to commit the interest earned at the same rate so that it yields additional payoffs at an equal rate thereafter.

Why not try it with an example? 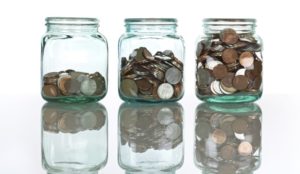 We know the majority of you know this, the real question is what makes this compound interest system so important is this domain of investment? How is it going to help an investor fill in his bags?

If we would have to explain this compound interest in the language of an investment, we would tell you a story of two friends Manish and Satish. Manish is more of a spender but somehow he manages to invest र5,000/- every year for the first 10 years, later he could not save anything so he stops investing. However, he gets a compound interest rate of 15% on his money for 30 years. Whereas, Satish was busy in his family and career life but happens to realize it is high time he starts investing so from the 11th year he starts investing र10,000/ every year (Manish knows Satish is investing double the amount he had invested) for the next 20 years. Like Manish, he too gets a compound interest rate of 15% every year.

So basically, Manish had committed र50,000/- and Satish invested र1,00,000/-. When they both decide to check their current position on their respective investment at the end of 30 years, Satish sees that he had made a sizeable र16.61 lac whereas Manish made र10.24 lac. They both understood that this is the magic of compound interest for Satish. The difference of र6.4 lac was because Manish stopped investing after a certain period.

You portfolio needs two basic logic to yield a compounding impact which are stated below:

It is not important how much you water the plants one day, more important is how regular you have been watering it to taste the fruits it will give in the future…

This canonical ‘Rule of 72’ might give you a better understanding to this concept.

After all, we know “Rome was not built in a day”. We need to build Our Rome brick by brick.

So all we go to do is “Keep Planning and let it keep Compounding!”

For everything else, Money Anna is always there.

He Has 12 years of experience in Financial Services with a deep understanding of clients needs and mindset.. He is a CERTIFIED FINANCIAL PLANNER (CFP) from FPSB India and he is also NISM Capital Market & Technical Analysis Certified and NLP Life Planning Certified Coach. An ardent cricket fan and a staunch believer of the fact that ‘Financial Literacy’ is the key to the financial success of each person.

View all posts by Prasad Shetty →